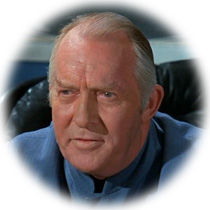 Australian.
Grant Taylor was dying of cancer during the filming of UFO and died shortly after the series had finished.