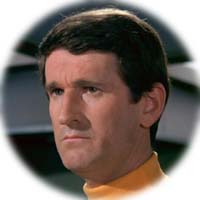 Attended Adelaide University studying engineering and law before going into acting. He moved to London in 1965.
Height: 5' 11 1/2".
Specialty is reproducing accents.
Attended the UFORIA II (89) convention.

Moved back to Australia in the early '90s.

Plus voice-over, narration, and dubbing work.

Many Thanks to Marc Martin for supplying much of this info. Marc Martin's UFO Series Home Page.