Sergei
The Spy Who Loved Me 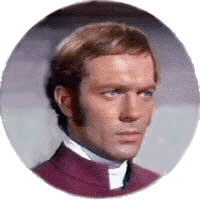 Born in Blackburn Lancashire on 24 December 1941.
Preferred to be called 'Mike'.
Got into show business by being a straight man in stage comedies.
6', light brown hair, blue eyes, 182 lbs, 41" chest (during UFO, at least!)
Was into fitness and healthy eating.
In recent years has concentrated on teaching method acting and raising a family.
Attended Phil and Ed's Excellent Con (1994).