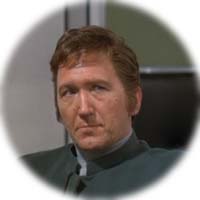 George left school at 14 and followed his father into the printing trade as an apprentice printer. He joined the RAF in 1943 but the war ended before he could complete his pilot's training. When demobilized, he worked n a number of different jobs before joining the Merchant Navy and serving as a steward for the Cunard Line aboard the Queen Mary, the Queen Elizabeth, and the Carionia on Atlantic crossings to New York. Eventually, he resigned his commission and joined a holiday coach tour company as a courier, a position he held for six years and allowed him to explore Europe.

While George's younger brother Danny was an actor, George had never considered going into the profession until a chance meeting with actor Dudley Sutton in a pub. Sutton suggested that George see Joan Littlewood who was casting a production of "Fings Ain't Wot They Used T'Be" and was looking for someone with George's features. Littlewood was known for not liking to use 'real' actors in her productions, so George's lack of training would prove ideal. Accepting Sutton's challenge, George met with Littlewood and given a role in the production. At the age of 35, George made his acting debut in the West End production of "Fings Ain't Wot They Used T'Be" and even appeared on the original cast album recording of the show.

This role was followed by roles in other Littlewood productions: "Sparrows Can't Sing" and "Oh, What a Lovely War". These three roles for the Theatre Workshop were George's training in the theater, paving the way to a long career in television and film.

George appeared in the first 17 episodes of UFO, but after a several month stop in production, he was unavailable for the remaining episodes as he was already starring in "Manhunt" and "Paul Temple".
Attended the UFORIA (88), FANDERSON 90, ACTION 93 conventions.